Welcome back to Azy Reading Journey website, where our goal is to make learning fun. We are still having fun with teaching and learning. Did you know that using numbers flash cards plus magnetic numbers – equal fun learning for preschoolers. 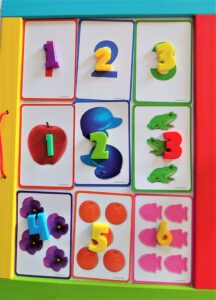 We are still working on numbers and lower-case letters, so, Azy is learning three things at the same time. In a previous post, I said he preferred to do the activities with the numbers more that lower-case letters.

After he was finished with the upper-case letters, he did not want to do anymore letter activity. So, we started thinking of activities that we could use to make learning the lower-case letters more appealing to him.

Numbers Flash Cards To The Rescue

These cards were purchased shortly after we started to teach Azy, but we forgot about them. However, a few weeks ago my niece was doing the numbers activity with Azy and she asked if we had flash cards. I told her I was not sure but I would check.

When I looked among some of the materials that we have, I found the flash cards. We had bought a pack of four, that includes Letters, Numbers Shapes and Colors.

Azy responded well to the activity that they did with the numbers flash cards and magnetic numbers.

Since then, we have been using the flash cards and he is having fun learning with them.

In the previous post, I mentioned that the numbers flash cards are helping Azy to learn the lower-case letters, because the spelling of the number was written in lower case letters.

You can read more about the numbers flash cards and other counting activities here.

We would start off by asking Azy to count the number of items on the card, then turn it over to identify the number.

In the video below, you will see Azy doing an activity with the numbers flash cards, magnetic numbers and the Mickey Mouse ABC. 123 nesting & stacking blocks.

You can go here to see more videos with Azy having fun with learning numbers.

The Touch and Learn Activity Desk Is Back In The Game

In a previous post, I talked about the Touch and Learn Activity Desk, and said it did most of the work for Azy, so we thought that it would be best to use it to test his knowledge.

However, as we continue to teach Azy, we are realizing that instead of telling him to recount the items on the flash cards repeatedly, or reminding him of what the number is, he could also use the Activity Desk.

There is a number pad on the Activity Desk that he can use to help him identify the numbers. When he is doing this activity, it will also help him to answer the questions that are being asked.

There is nothing wrong with asking Azy to recount the items on the flash cards, or reminding him what the number is.

However, our goal is to find an activity that will help him to recognize and identify the number by himself, and we think that the Touch and Learn Activity Desk might do well in helping him at this time.

You can read more about the Touch and Learn Activity Desk here.

As we continue to do the activities with the numbers flash cards, we spend time working on lower case letters, by asking Azy to identify the letters on the cards.

This is also helping him to learn to spell the number, even though we are not focusing on that at this time. However, it will be useful when we are ready to do that activity.

Since we have been using the flash cards, he is more willing to do the activities with the lower-case letters. Recently, he has chosen to start using the Letters Flash cards, and I take that as an indication that he might be ready to learn more. 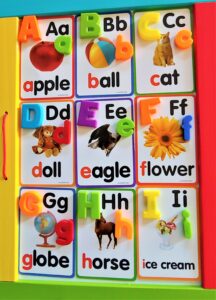 Therefore, we now have the opportunity to use several activities to help him learn lower-case letters.

When Azy is using the Numbers Flash cards and he hears the word “cat,” he refers to the Alphabet Train.

He also mentions the Alphabet Train when he is using the First Words Wooden Spelling Boards and he hears words like cat and hat.

The Alphabet Train Is In Motion

When we first started teaching Azy, we were using the reading program, “Little Champion Reader,” and he heard those words when he was watching the DVD.

Sometimes, he is now asking to watch the DVD, and we are allowing him to watch it. So, we will see how far that will go.

I will talk more about the Alphabet Train in the next post.

As always, thank you for taking the time to read about Azy’s reading journey.

I would love to hear from you. What do you think?

Go here if you would like to see more videos of Azy having fun with learning the numbers and letters.

If you have any questions, go ahead and leave them. I will do my best to answer them. 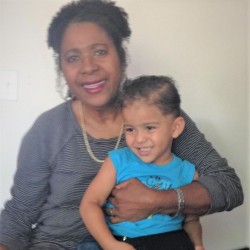 Hello, my name is Jackie. My family members and I are teaching my grandson Azy to read and I am writing about the challenges and the joy that comes from doing so. My goal is to write articles that will encourage and help parents and others who want to do the same for their kids or other children. Thanks for travelling along with us. Blessings, Jackie