Hi there, thanks for coming back to Azy Reading Journey website. The fun is increasing in both learning and teaching. We are still using fun games to teach letter recognition.

Azy still wants to move ahead with learning all the letters of the alphabet instead of learning them in groups, such as “M” to “R” then “S” to “X.” 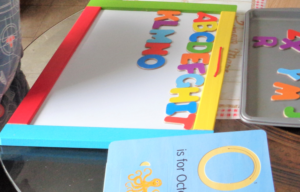 He continues to show improvement. In using the letter recognition games, we are seeing that he is doing better with recognizing and identifying the letters.

In the last post, I spoke about the plan to have Azy going back to using the magnetic letters and the Double-Sided Learning Board to see how he would do now.

I also said that we played those games before, but when we first played them, Azy would only identify the letters and place them on the board or on a tray.

However, instead of playing with the magnetic letters and the Double-Sided Learning Board games, Azy chose to use his “A is for Apple (Board Book).” You can read more about that here.

When we played the games with the magnetic letters and the Double-Sided Learning Board, Azy did not placed the letters in alphabetical order.

However, I do not see that as an issue, because the goal is to help him to recognized and identified the letters.

Overall, he did very well in recognizing the letters, but he is still using his LeapFrog Go-with-Me ABC Backpack to asked Mr. Pencil to help him identified some of the letters.

There are times when Azy will identify the letters, then at other times, he will ask Mr. Pencil for help with the same letter that he identified in another game.

Maybe, if Mr. Pencil was not around to help Azy, he would try harder to identify the letters.

I wrote a review about the LeapFrog Go-with-Me ABC Backpack.

Sometimes, Azy is unsure if the letter he has is “M” or “W.” So, he mixes those two up, and sometimes says “W” is for monkey. As Azy is learning to recognize and identify the letters, we are also working on helping him to learn colors.

Azy knows the colors, but sometimes he forgets. I had difficulty uploading  the video, so I added the picture of the finished board.

You would have seen Azy taking the letters from the container and placing them on the board.

There were two sets of letters in the container, because we were going to place the second set of letters on top of the first set. Go here if you want to see the video of Azy having fun with the magnetic letters and the Double-Sided Learning Board.

When we play the alphabet games, we usually use more than one set of letters to help Azy see the same letter several times.

He did very well with focusing, and he did not get distracted for very long. That is a big improvement compared to when he had difficulty focusing, and was very reluctant to do the lesson.

You can read more about Azy’s focusing problems here. 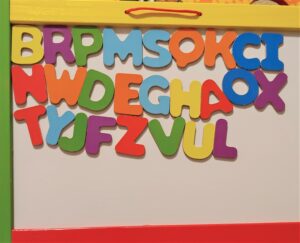 Before we played the games using the magnetic letters and the Double-Sided Learning Board, we played another game using foam letters.

We used the foams to make a mat, and we did it Azy’s way, so the letters and numbers are not in the correct order.

While we were making the foam mat, Azy was identifying the letters and saying what they were for.

When it was time to place the second set of letters on top of the first, instead of continuing to use the magnetic letters and Double-Sided Learning Board,

Azy chose to put the second set of letters on the foam mat. So, he continued to choose the letters, but by this time he had them on the carpet.

When he took up a letter, he would identify it and then place it on the corresponding letter on the mat.

He had a lot of fun playing this game, and was jumping from one side of the mat to the other.

In the video clip below, you will see Azy having fun playing with the foam mat and magnetic letters. You will also see the completed board in the video.

I believe that games will work well, especially for kids, like Azy, who love to play, and those who have difficulty focusing.

Azy is having a wonderful time, and He is still very willing to do his lesson. I have to keep comparing how he is doing now to when we first started.

In the beginning, it was not easy for Azy, and he was very unhappy when it was time for him to do the lesson.

Since he is going to daycare, we thought it would have been easier to get him to settle down and do the lesson, but we were so wrong. Read here to learn about some of the activities that we used to help Azy with his focusing problems.

Azy loves to play, so using games and other fun activities to teach him have done wonders and he is now showing more interest in learning and will quickly choose the activities that he wants to do.

Sometimes, he will do the lesson before he goes to bed, that’s how willing and excited he is now.

As always, thank you for taking the time to read about Azy’s reading journey.

Go here if you would like to see more videos of Azy having fun with learning the letters of the alphabet.

I would love to hear from you, what do you think? Leave a comment and let me know.

If you have any questions, leave those too, and I will be happy to answer them.

Hello, my name is Jackie. My family members and I are teaching my grandson Azy to read and I am writing about the challenges and the joy that comes from doing so. My goal is to write articles that will encourage and help parents and others who want to do the same for their kids or other children. Thanks for travelling along with us. Blessings, Jackie